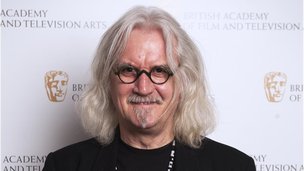 Someone emailed me to ask about the Billy Connolly Bafta event at The Fruitmarket in Glasgow the other night. Here's what I replied:

"Billy Connolly was a very special affair. It was relatively slow paced (he's 70 now). A seated interview with clips of films throughout. He seemed almost a wee bit nervous/melancholic on occasion but the stories and memories just flowed and he got into his stride before long: Richard Burton and priests in confession and touching a snake at Kelvingrove Museum when he was a boy, shopping  with Robin Williams and Michael J Fox, thinking Judi Dench fancied him, being the only person with a Glasgow accent in a film ("it's like a joke: this Glaswegian walks into a film..."), watching an Orange Walk band performing Any Dream Will Do on Argyle St., etc, etc.  There were questions from the floor including a guy from The Gorbals who told him that The Crucifixion changed his life.

When he got the BAFTA Scotland Lifetime Achievement award at the end he stood centre-stage and spoke about how much it meant to him that this was from Scotland, that it almost broke his heart and "it hits me somewhere I live". And then his hands shook and he teared up and it felt like most of the room did the same."
Posted by Francis Macdonald at 09:11 No comments: