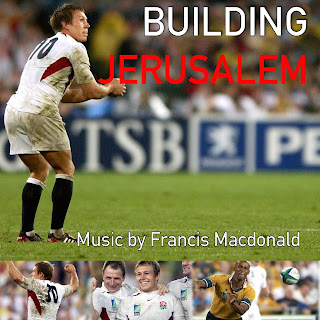 A wee while ago I provided the soundtrack to the acclaimed feature-length theatrical documentary "Building Jerusalem" (New Black Films). It's an engaging, highly watchable look at England's historic 2003 World Cup win in Australia against Australia. Star kicker Jonny Wilkinson is a particularly, um, interesting talking head - obsessive, determined and heroic. In whichever order you please.

Working on this project was a great experience, as was the red carpet premiere at the Empire, Leicester Square in London a wee while ago.

The DVD was released a couple of weeks ago.

Now the soundtrack is available to order here on i-tunes.

Meanwhile I've just had a nice couple of days in North Berwick where I stumbled across a unique rock formation on the beach. 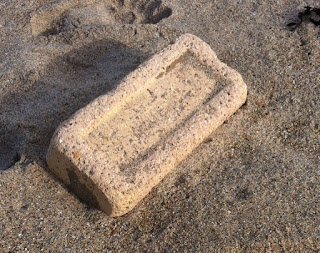 On the way back to Glasgow I paid a visit to Edinburgh Gallery of Modern Art where there is a Douglas Gordon exhibition List Of Names (Random) which apparently comprises a list of the people the artist can remember ever meeting. 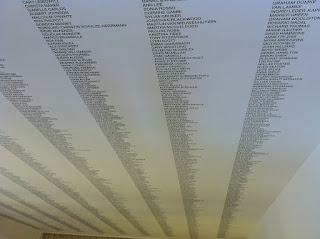 I found a certain singer/songwriter lurking amid the many:

Before I go, the amazing Carey Lander has now raised close to £43k for Sarcoma UK.

Posted by Francis Macdonald at 12:57 No comments:

Last night, courtesy of BAFTA Scotland, I went to a preview screening of Charlie Higson's Jekyll And Hyde, a 10 hour ITV series that will run from late Oct. 'Twas fun - rollicking, unsubtle, campy fun. Think BBC's Sherlock + Indiana Jones + something else that will come to me after I have published this and can't be bothered editing it.

I keep listening to this short piece by Mendelssohn. Lovely. 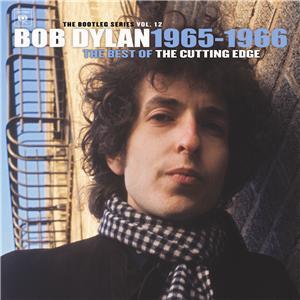 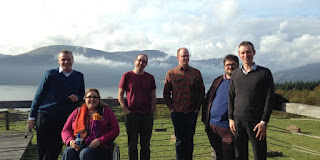 I'm finishing up my contribution to "You Can't Get There From Here" - a collaborative co-composition with 5 other composers (left to right in picture above: Sonia Allori, Colin Broom, Drew Hammond, John De Simone and Oliver Searle). It will be premiered at the Sound Festival, Aberdeen on 24th October with a performance by Ensemble Thing. It's been a fairly amazing process for me; making me write music in a different way. There's a wee bit more info here. Exciting.

I am also working on music for a documentary about prisons. (Not using a lot of penny whistles or slide trombones for this one.) 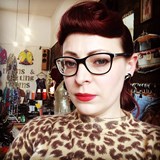 Carey Lander from Camera Obscura has now raised over £40k for Cancer Research. Amazing. I know Carey has taken a lot from the support and generosity of folks out there. Feel free to contribute/share...

Posted by Francis Macdonald at 05:38 No comments:

I am working on music for a thing that I can't tell you about. Hush hush and all that.

Last week we paid a family visit to the Glasgow Art School and looked at some work by the graduates. My 5 year-old took the opportunity to draw something for the visitor's gallery: 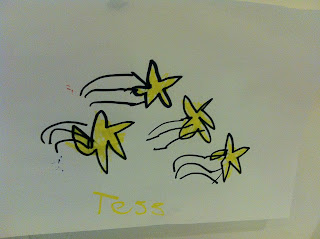 I went to a great night of Scottish short films at the GFT last week. If you get the chance to see "United We Will Swim Again" it's lovely, short doc about the campaign to save Govanhill Baths.

Two years ago yesterday (as I type) I got the initial idea for this:

More info and music at www.FrancisMacdonald.com

I am enjoying dipping in to this: 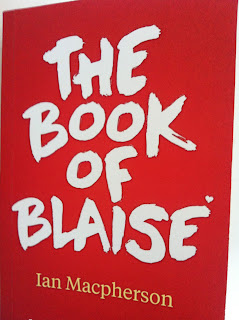 Plenty of passages and phrases to make one smile out loud. For example; "I gently kissed away the remains of a nut cluster from her upper lip."

Carey Lander is closing in on £40k for her Sarcoma UK Just Giving fund. Please donate or share here.

Posted by Francis Macdonald at 03:00 No comments:

For my birthday dinner I went to Don Costanzo. I had been meaning to go there ever since it relocated from Buchanan Street (it used to be The Caprese). I have a memory of eating there with pals about 25 years ago and the Don himself brought out a fake cappuccino and pretended to spill it over a couple of the guests. One of the waitresses told me he still does it from time to time.

DC was out of the kitchen swanning round the restaurant every 10 minutes or so daring you not to like the food, giving customers a telling off for eating too much bread, kissing female customers farewell, haranguing others into eating the beautiful cannelloni he had just prepared (he brought the baking tray through from the kitchen as proof), etc. Today I discovered that he is going to retire. Dec 31st will be the last day of the restaurant. I recommend getting a taste of this Italian-Glaswegian institution before they close the doors for good. Aww. 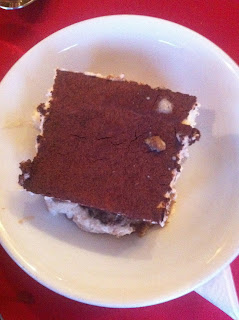 A tiramisu on Saturday

Then it was on the good ol' GFT For "Irrational Man" which I enjoyed. I didn't love it. I could pick a few holes if I felt like it. But I enjoyed it.

You can now order "Building Jerusalem" - featuring my soundtrack - on DVD here.

As I type it is Sept 14th. In 6 days it will be appropriate to post this:


And finally, Esther: another reminder for Carey from Camera Obscura's Just Giving Page.


Posted by Francis Macdonald at 02:19 No comments:

This week I saw "The Closer We Get" - a lofi homegrown Scottish doc. Highly original and compelling. Go see it... 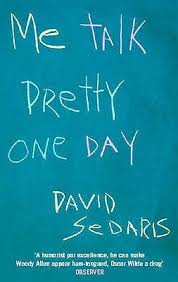 Here is a (six year old) artist's impression of my pavlova birthday cake: 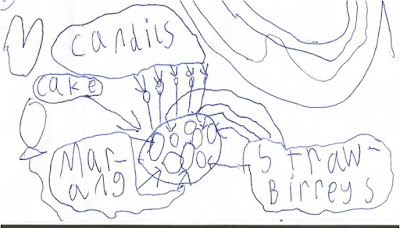 Here is my cake: 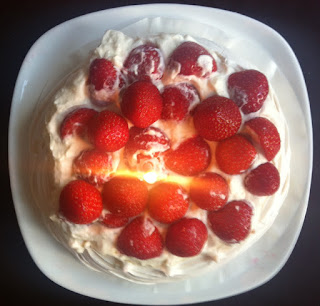 I suppose I'm too old for presents (*cries of "Not at all!", "Don't be silly, Francis!"*), but if you want to make a gesture you could donate to or share this page:

Carey https://www.justgiving.com/Carey-Lander
Posted by Francis Macdonald at 12:37 No comments:

So I enjoyed my first Maigret novel. I was reminded that "Monsieur Hire" was based on a book by the author Georges Simenon who, according to Wikipedia, claimed in 1977 that in the 61 years since his 13th birthday - och you can read it yourself. Anyway, must watch this again sometime:


Last night I went to a good masterclass with film composer Jocelyn Pook, courtesy of BAFTA Scotland. Talented and, like me, very modest. Great to hear how she got to work with Stanley Kubrick. (Stanley Kubrick; what a great name to have). I fancy hearing more of this soundtrack...


Carey from Camera Obscura is ill but she is doing a brilliant thing in raising money for a good cause. Please spread the word.

Tell your pals. On Thursday (10th Sept) I am doing a free introductory workshop thingy for a Songwriting Course that I will be running for Glasgow University's Centre For Open Studies. 7pm in the Boyd Orr Building, Glasgow University. It's free and should be fun - https://www.eventbrite.co.uk/e/information-night-for-creative-writing-tickets-18469074499

I am writing music for a documentary about Prisons. More when I can tell you but it is pretty compelling viewing.

Meanwhile you can order the DVD of "Building Jerusalem" here.

It's not September Weekend yet so there's no excuse to post this...


Posted by Francis Macdonald at 08:01 No comments:

On Tuesday I was down in London for the premiere of "Building Jerusalem", a theatrical sports doc about England winning the rugby world cup in Australia against Australia in 2003.  My first feature-length film soundtrack.

We were in the Empire, Leicester square (HUGE screen). The film + Q&A with director James Erskine, star kicker Jonny Wilkinson, etc. was being beamed live into 200 cinemas all round the UK. It's a dramatic tale told well with engaging characters. You don't have to be English (tick) or have much of a clue about rugby (tick) in order to appreciate it. And the soundtrack is absolutely amazing

Here is a picture of the film poster in Oxford Circus: 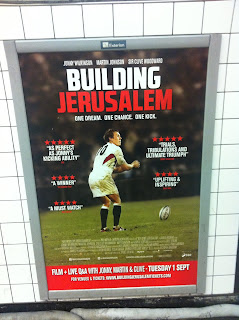 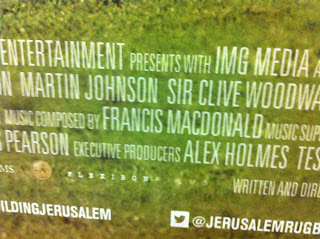 Here is a picture of a man that looks like Professor Robert Winston parking a swanky car in Covent Garden: 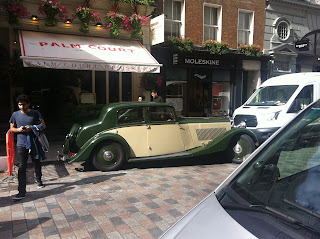 Here is a picture of me considering stealing the Rugby World Cup to take back home to Scotland to a hero's welcome: 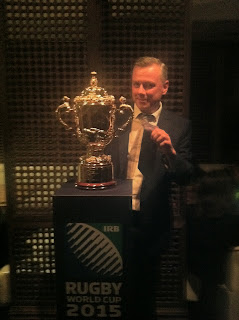 Here is a picture of my tiramisu and coffee in Polpo, a cafe in covent garden (recommended by a pal and now recommended by me. Especially the fritto misto. I had to ask what that was, btw. Hmm?  You already knew what fritto misto was? Really? Feeling smug?): 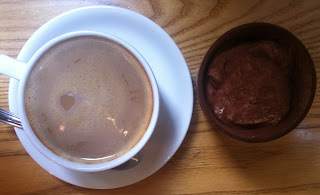 Here is a picture of me indicating the whereabouts of Big Ben: 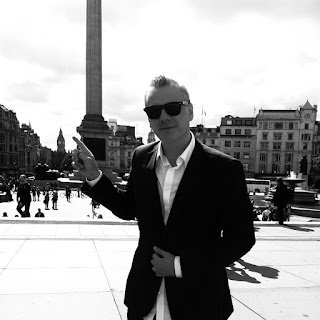 This is where I ate some meatballs and spaghetti in Soho: 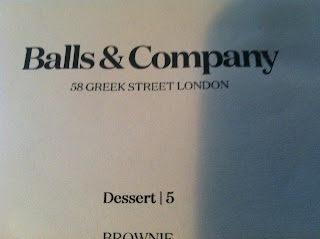 Here is the book I bought in Foyles, Charing Cross Rd to read on the train journey home: 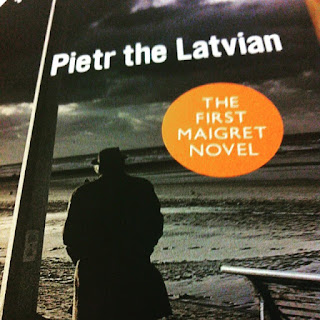 Thanks, London. And New Black Films.


Posted by Francis Macdonald at 02:34 No comments: