"An eccentric treasure for those who like this sort of thing"

So I went to London for meetings... 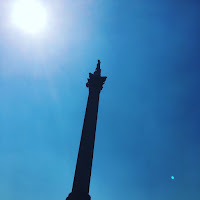 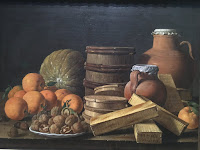 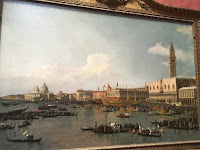 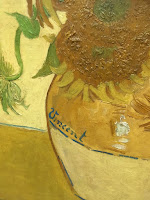 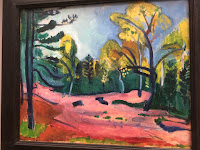 ...and to get my portrait painted with Harry Pye (read Harry's blog here)... 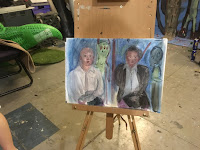 Here is a new video by Gordon Beswick for "We Love Mike Love"...

And here's what The Arts Desk has to say about "Bonjour" - our new album, released July 7th via Republic of Music distribution:

"...a funny record, in both senses; old-fashioned, poignant, likeable and offbeat. Macdonald is a dab hand with sweet melodic easy-listening indie numbers such as “Isle of Capri”, “Paul In Vauxhall” and the Beach Boys parody “Mike Love Fan Club”, while Pye contributes spoken word anecdotes that are perfectly written, clumsily delivered and gripping, especially “I Made Him Smile”, his account of the two times he met Lucian Freud. An eccentric treasure for those who like this sort of thing."

You can order it here...

Posted by Francis Macdonald at 04:54 No comments:

Today I attended a moving service for Simon Cottrell at Maryhill Crematorium.

Simon died suddenly a few days ago. 47 years is no age.

I got to know him when he and his great mate Zac and me backed Laura Cantrell for some UK/Eire shows a few years ago.

He was a good bassist and harmony singer and he was a lovely, mellow, fun, sweet-natured person to be around.

(I also worked with Simon and Zac on some recordings for a film soundtrack for composer Max Richter. I can't remember if we did one day or two in a studio in Glasgow. We were looking forward to seeing the final film but Richter's work was subsequently given the elbow so that Clint Eastwood could do the score...)

After one run of Laura Cantrell gigs, Simon and I were driving the hired van up home to Glasgow from somewhere in England. It was quite late at night. Rainy and dark - somewhere in the midlands.

Simon pulled over when he saw a man next to a parked lorry on the motorway hard shoulder, waving and seemingly in distress. We got out of the van and walked up to the man who told us in a kind of daze that he'd just found out that his daughter had died. I didn't know what to say or do but Simon instinctively threw his arms around him and held him saying, "Oh you poor man".

Simon leaves Jana his partner of 10 years, his son Woody and other family and friends.

What can you say.
Posted by Francis Macdonald at 14:40 No comments:

Barcelona, Orleans, Bordeaux, Porto and Nimes - thanks for the memories

BARCELONA - ah, the splendid Primavera Festival. I caught up with some pals, experienced Sleep for the first time and visited the Picasso museum.
ORLEANS - first time here. 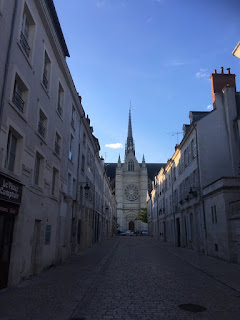 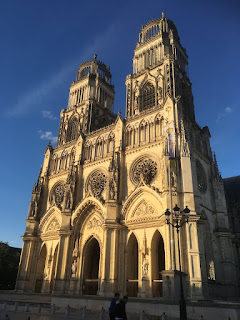 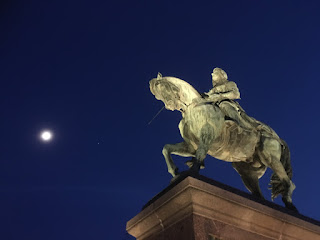 I loved how at the venue they laid out dining tables and served lunch after soundcheck. They cleared the table away for the punters and then laid them out again for dinner after the show. Band, crew and venue staff all sitting together to each and drink. Egalité and Faternité right enough. Our guitar tech George proposed a fitting toast to the chef. 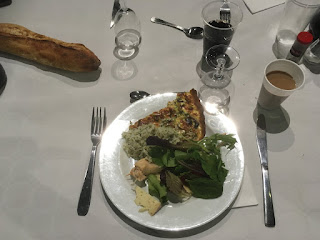 I took in Le Miroir d'Eau:

I also visited the Museé des Beaux-Arts for a a bit of soothing, cultured meditation. I hadn't reckoned on the Miracle of Saint Justus or Mozart Dying.
PORTO - loved it. The old city sprawling down to the Douro River. Fresh seafood and 10 year-old port. Laundry hanging out of windows two floors above posh-ish restaurants. The dark, soulful eyes of seemingly every other portrait in the National Museum Soares dos Reis. There's a kind of invisible melancholia lurking, threaded throughout the place. And don't get me started on the custard tarts.

The gig was fun too. 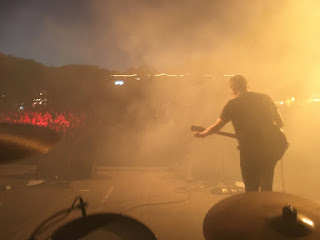 NIMES - another beautiful, historic place where I'd never been. 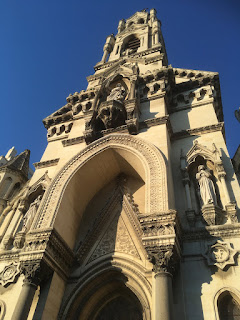 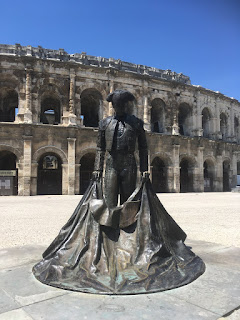 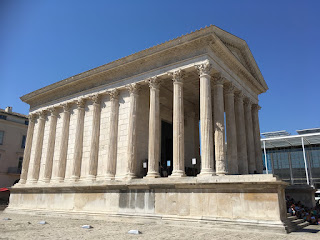 We drank mojitos and got a recommendation for a restaurant - L'Écusson - where the owner served his pal's wine. Local knowledge is the best. 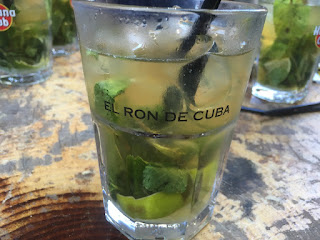 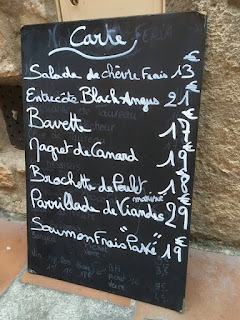 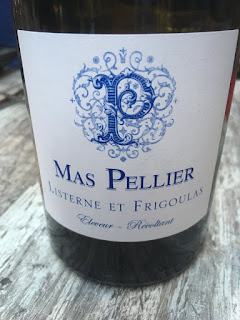 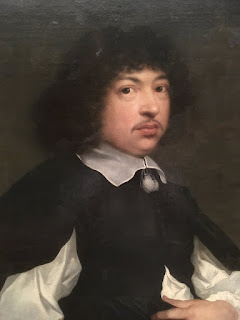 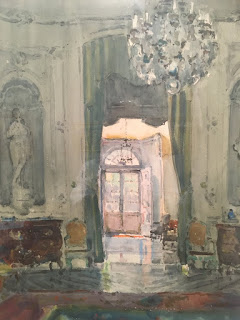 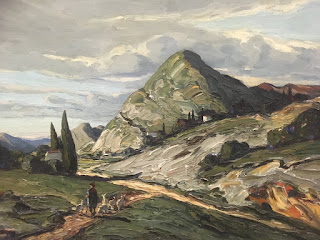 ...and discovered that if they ever make a film of about Jonathan Richman, they could get Rubens' Francesco Marcelliano de Barea to play him: 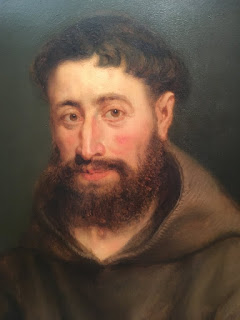 ...and Roddy Frame could play the young Liszt as painted by Jean Vignaud... 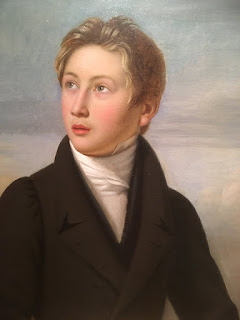 Gig was good too. 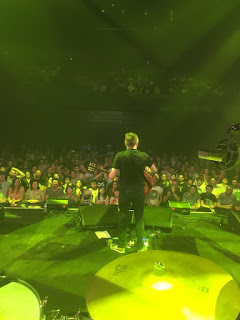 On the return flight I caught upon with Better Call Saul.

Last night I watched "Billy Connolly Portrait Of A Lifetime".

Billy is a hero and this was a lovely watch. I was *so* chuffed when two pieces of my music popped up: "20 Sep" played when Billy visited his John Byrne portrait in the People's Palace in Glasgow; and then I gasped when some notes from "Antoine Duhamel" started up as Billy visited Dali's Christ Of St John Of The Cross at Kelvingrove Museum (that piece was named for the man who created the soundtrack for Franco-Glaswegian curio Death Watch - but that's another tangent). A snatch of Teenage Fanclub's "Broken" was in there too. And I was a bit of a puddle by the end. I do love Billy.

This is me since yesterday.

Posted by Francis Macdonald at 02:45 No comments:

As I type Teenage Fanclub are about to head off to play festival and club shows in Spain, France and Portugal. I picked the wrong week to give up paella, cheese and custard tarts. Queso sera...

We had fun at the CCA earlier this week. 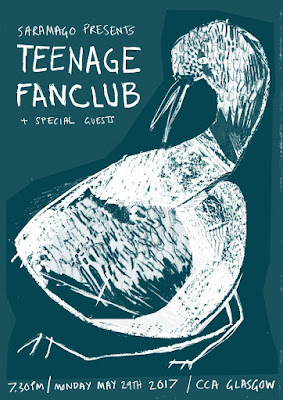 Norman even tuned up for the occasion: 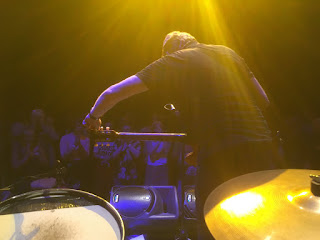 
...and this (you don't have to like football or support 'the hoops' to enjoy it).

Remember my album with Harry Pye - "Bonjour" - is released on Shoeshine in UK/Europe on 6th July:

Posted by Francis Macdonald at 02:57 No comments: