The embargo is lifted... 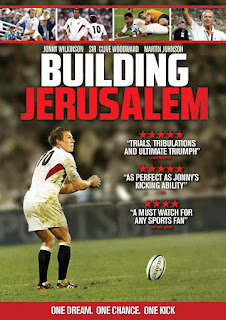 It tells the story of Jonny Wilkinson & Co. beating Australia in Australia in 2003 allowing England to become the first northern hemisphere team to win the rugby World Cup.

I loved working on this. It's a dramatic story with engaging talking heads. Editor Michael Nollet was great to work with; as were Polar Patrol Publishing; as were producer Victoria and director James at New Black Films.

If you are going to the premiere at the Odeon, Leicester Square on 1st September, I'll be the bloke in the tartan tie...
Posted by Francis Macdonald at 05:04 No comments:

Thumbs up for Inside Out. Clever. Sadness is part of life. Yup. 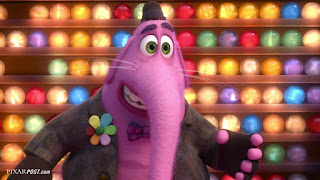 I caught this the other night and listened again. Yay for Josie Long and Radio 4.

I am working on music for a documentary series and also a short film.  Which I can't tell you about.

An acquaintance in Paris offered to send my-album-that-you-can-order-here to Bertrand Tavernier. So that's nice. 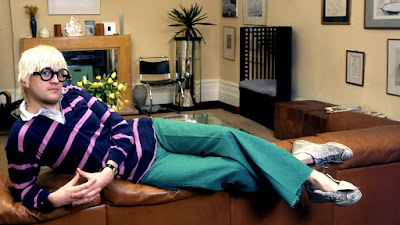 Posted by Francis Macdonald at 02:59 No comments:

Conquer Paris With An Apple

So "The Look Of Silence" is a brave, powerful film.

Some pictures I liked:

"Still Life With Paint Tubes" by Samuel John Peploe;
"Overturned Basket Of Fruit" by Cezanne;
"The Flower Seller" by Picasso;
"The Last Of The Clan" by Thomas Faed... 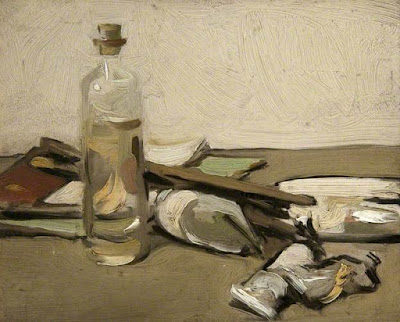 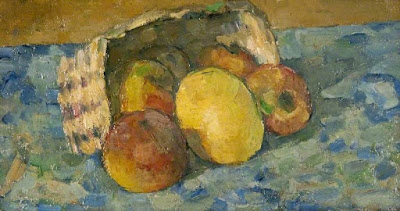 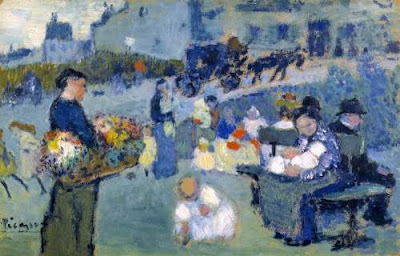 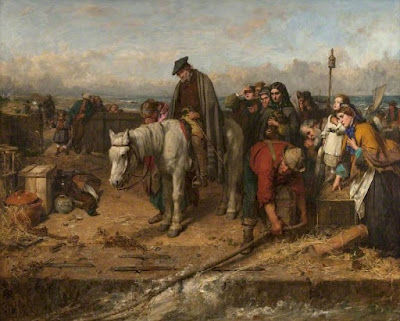 I produced several tracks on the forthcoming album by Aaron Wright including this one.  Tell your pals.

Posted by Francis Macdonald at 07:08 No comments:

The Lee Miller and Picasso exhibition at the Scottish National Portrait Gallery was recommended to me so I had a look - and I was glad I did.

Maybe it's parenthood, and also knowing, from Francoise Gilot's book, how dreadful Picasso was with some people (friends, lovers, the mother of his children; that kind of thing), but this was my favourite picture: 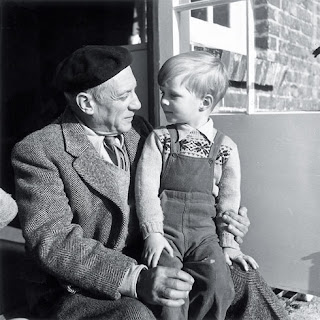 I am working on a co-composition for Aberdeen's Sound Festival along with fellow composers Drew Hammon, John De Simone, Sonia Allori, Colin Broom and Oliver Searle. It's a kind of pass-the-parcel trust exercise. Everyone starts a piece then passes it along. Eventually we all will have had a hand in all six compositions and it will be premiered by Ensemble Thing at Sound on 24th October. The Herald ran a wee piece on it here....  - I am loving the experience so far.

Tinkety-tonk, old fruit.
Posted by Francis Macdonald at 04:41 No comments: 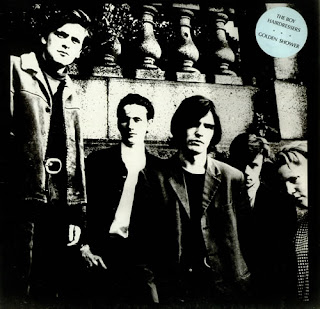 As a pleasant epilogue to my trip to Spain with Laura Cantrell; here comes a new Spanish music podcast about different projects (mainly guitar pop) with which I have been involved over the years.

*adjusts tartan rug and stares into the fire* 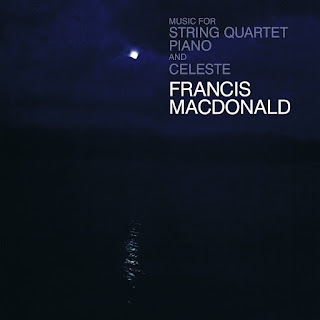 "Open, tonal and ambient...an evocative soundtrack..."September Weekend [is] quite beautiful".
...and you can order the album on CD/LP/Download here.
Posted by Francis Macdonald at 09:43 No comments: 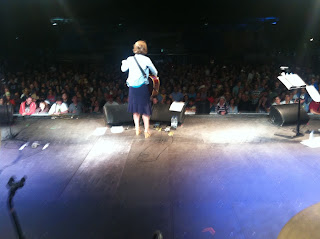 Spain never disappoints. And neither does Laura. All those years after the release of Not The Tremblin' Kind, a certain heady feeling returned, watching NY's 'Princesa Del Country' break new ground and win new corazones. Great to play stuff from the recent albums alongside "The Whiskey Makes You Sweeter", "Two Seconds" and "Queen Of The Coast". Sure felt like old times.

On Tuesday we caught up over a meal near Puerto Del Sol. 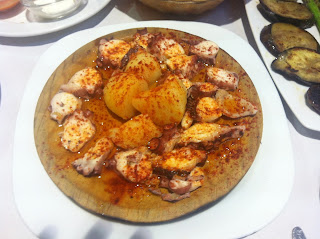 On Wednesday we picked up guitar hero Lyle Brewer and bass hero Jordan Caress (LC's fellow Americans also visiting Spain for the first time) and drove up to Bilbao for a lovely show. 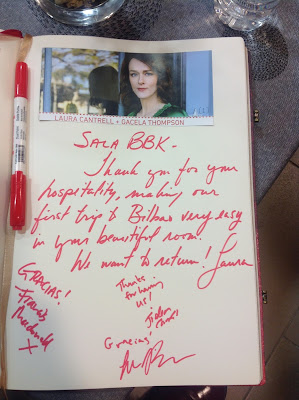 Turns out Lyle  can invoke the spirits of Scotty Moore, Chet Atkins and Merle Travis, while Jordan can play bass, sing harmony and cue changes for rusty drummers mid set like a demon. 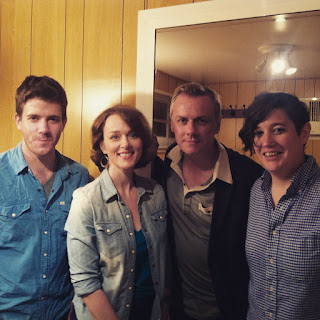 On Thursday I accompanied Laura to RTVE's Radio 3 in Madrid for Como Lo Oyes; lovely chat and session with music nut Santiago Alcanda. Hear it here. 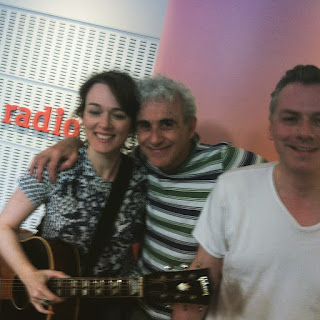 Then we had some free time in Madrid. I think I last visited The Prado was with Michael Shelley on a Cheeky Monkey tour of Spain (!) many years ago. This time around there was a temporary Picasso exhibition. 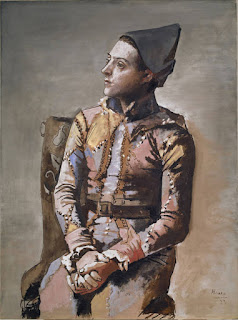 Friday we drove to Riaza for soundcheck in a football park for the Huercasa festival. Then we went into the old town centre. 40 degrees in the afternoon. Deserted play parks. Houses with the shutters pulled down. No one on the streets. I was waiting for a doleful Mission bell to sound. Clint Eastwood could have popped up on a roof waiting for the baddies to attack. But he never. 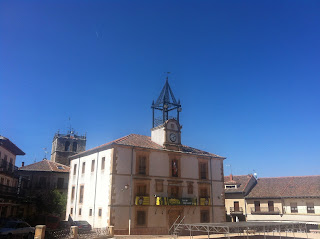 Cafe Con Leche at La Fonda and then back to the gig with The Old 97s opening for Lady Cantrell. Great audience. Great fun. Queues for Laura to sign merch...It wasn't hard to feel the love. 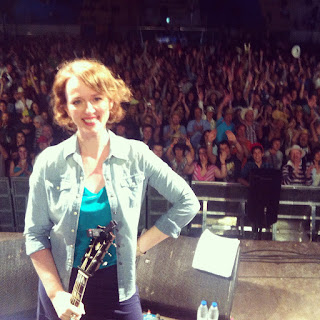 Friday - Paella at La Casa Del Abeulo and a last cafe con leche before jumping in a taxi to the airport. 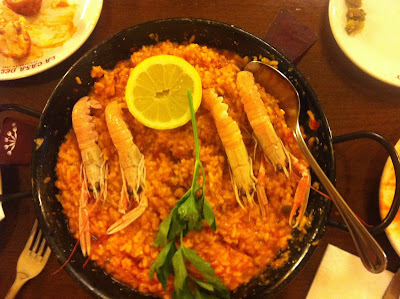 There are worse jobs. Let's do it again sometime.

Posted by Francis Macdonald at 14:44 2 comments:

As I type I am about to head off to Spain (best country in the world?) for two shows with Laura Cantrrell. 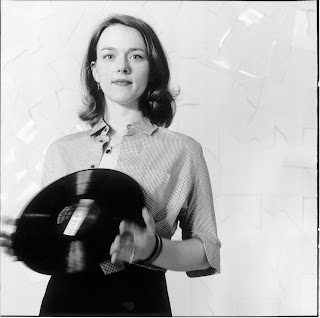 I well remember, many moons ago, producer Jay Sherman-Godfrey passing through Glasgow and giving me a CDR with four songs: Two Seconds, Not The Tremblin Kind,Churches Off The Interstate and Queen Of The Coast (!!)- and telling me to be sure and give it a couple of listens.

Well, I proceeded to mutate into the raving Laura Cantrell fan that I have been ever since; leaving enthusiastic messages on her NY answering machine in my unapologetic Glaswegian brogue telling her to push on and finish an album that I would release. Laura indulged me.

The resultant debut "Not The Trembling Kind" was a thing of wonder. Laura's take on Amy Allison's "The Whiskey Makes You Sweeter" being just one of many highlights.

Getting Laura over for shows from early 2000 onwards and helping to build up awareness sure was exciting.

Think of all the music that the late great, highly esteemed broadcaster John Peel must have consumed and had pushed on him in his time. And yet he sent me this postcard in anticipation of what ended up being Laura's second album "When The Roses Bloom Again":

"This is the 14th copy of this (Laura Cantrell) LP I've bought. 12 have gone to friends, 1 is in my car, this is a spare. When are we going to get some new stuff? John" 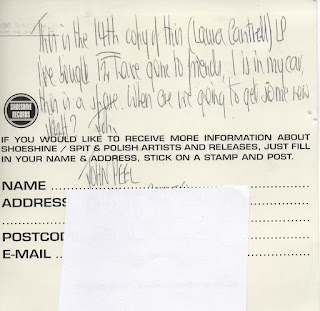 All these years later I am still a fan. And a pal.


Posted by Francis Macdonald at 07:46 No comments: 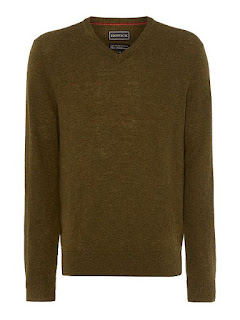 Yesterday was hottest day of the year so I bought a lambswool jumper, of course.

I also attended the BAFTA Scotland AGM and listened to a podcast of Omid Djalili on the Radio 3 Essential Classics. He's one of those folks whose laugh makes you laugh.

On Monday I saw Robert Carlyle's The Legend Of Barney Thomson. Bobby gives a good performance, commendable for its lack of vanity. And Glasgow scrubs up well in the cinematography.

On Tuesday I saw We Are Many. Very inspiring, powerful and emotional. Lots of people should see this film.


In other news I am working on music for a new documentary series and composing music for a collaborative project with other composers which I don't think I can't tell you about. Although one or two folk do seem to be blogging about it...

Meanwhile The Vaselines headline the Scooter Tent at Wickerman Festival on 24th July and Camera Obscura have some live shows coming up (UK, US & Mexico).

Oh! And I am am off to Spain next week to drum with the amazing Laura Cantrell for a couple of shows! Ay caramba!

And you can still buy this on white vinyl, CD or download.


Posted by Francis Macdonald at 04:34 No comments: