The Wisdom of Einstein 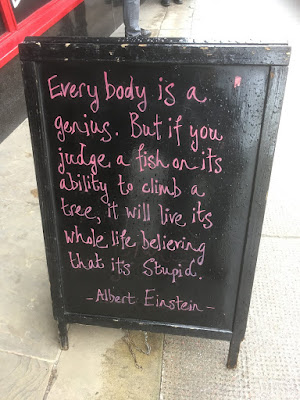 Well I liked it. 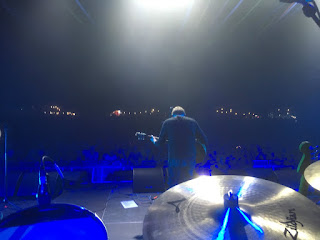 A certain 8 year-old asked me if she could join Teenage Fanclub if she learns guitar. I managed to change the subject.

I dipped into the late, lamented Anthony Burdain's "Kitchen Confidential"- rascal that he was - a few years ago and I enjoyed this article in particular. I'd never seen his show "Parts Unknown" so I found the episode on Scotland on Netflix (Season 5). Recommended. (Beautifully shot!). Deep friend haggis with chips and cheese and curry sauce. Wha's like us?

Fat Girl, Interrupted is a brilliantly told story from The Moth. Just realised how the opening line plants a seed...

Posted by Francis Macdonald at 14:09 No comments:

A while ago I was in London for Tracyanne & Danny's Rough Trade East in-store, just off Brick Lane in London. Audrey Gillan - whom I'd never met (though we followed each other on social media) - came up and said hi and asked if I ever made music for radio and did I have 10 minutes so she could tell me about a project she was working on?

She led me round to Fournier Street in the shadow of Hawksmoor's Christ Church (creepily discussed in Alan Moore's "From Hell"). The Ten Bells pub sits on the corner. Audrey told me about Tara & George, a homeless couple who have been hanging out on this street for years. Audrey had been recording interviews with them for a documentary series for BBC Radio 4. Just then Tara appeared and perched on her usual step with some bags and a bottle of cider. Audrey took me over and introduced me as her friend from Glasgow. Tara asked me if I have any money and did I know when her birthday was.

After a wee chat Audrey walked me back to Tracyanne & Danny and said she'd be in touch. She was off to Hong Kong the next day. All told our excursion took about 10 minutes right enough (during which time we also bumped in to Audrey's neighbour who had helped with recording duties for the  T&G project. Audrey would explain this thus: "synchronicity").

To be proactive I sent off some initial musical ideas. Audrey responded positively and said she would send the music on to her producer and advised that if he was less enthusiastic she'd "batter him". Audrey is from Glasgow.

Well reader, Audrey didn't have to batter her producer. And now the first episode of a moving story, with which I am proud to be involved, can be found here.

Homelessness is one of the UK's great shames. Audrey's sensitivity in telling this story is a force for good. And we need some good right now.

I've been working on music for a couple of other projects that I cannot tell you about just yet. Jeez I am such a tease!

Talking of tease - what about this?!

So - some films I recommend.


And - if you haven't ran off to join an Agnostic Satanic Humanitarians Against Organised Religion cult after all that - this:


Me and my kids are looking forward to this: 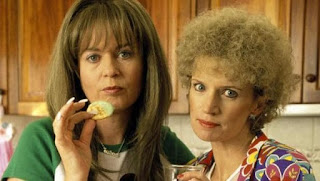 Kath & Kim are my new fantasy dinner party guests. They can sit either side of Billy Connolly.

"I Don't" is a well told story by Richard Kind for The Moth.

Teenage Fanclub play Hebden Bridge this Friday and then Green Man festival on Saturday. Should be fun. We've been rehearsing. Who knew Bohemian Rhapsody had so many chords?
Posted by Francis Macdonald at 14:45 No comments:

Oh it's you. Hello there.

Lately I've been doing music for a radio doc and a couple of documentary films, and also a couple of projects for BBC and STV.

I was filmed playing piano in Glasgow Central Station for a thing (don't ask) (actually do) (no don't - I can't tell anyone about it yet).

And I was very chuffed to hear a couple of pieces from my "Hamilton Mausoleum Suite" album on this BBC TV doc about Tacita Dean.

Recently I caught a couple of Monsieur Hulot films at the good ol' GFT, bringing back memories of my mum taking me to see "Playtime" when I was wee.

Loved reading "Swimming To Cambodia" at last. I think I caught the last few minutes of the film on Channel 4 yonks (and I mean yonks) ago. Somehow it popped into my head again and I decided to pick up the book.

This first episode of "Life In Pieces" made me laugh.

This is a moving film.

Loved this Moth story. Made sure my children heard it and took what they could from it.

The disaster of Brexit continues to humiliate but this Twitter thread was a welcome distraction.

Y'all know Tracyanne & Danny and The Pastels are playing in Paisley on 13th Oct, right?

I'll leave you with this.

Posted by Francis Macdonald at 09:46 No comments: