At last. Something my late mum would have been proud of. 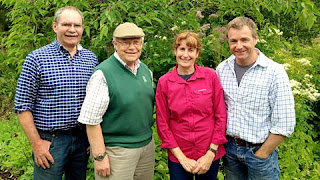 This week I visited my old pal John McCusker at his fancy home recording studio for some TV music fun.

John played fiddle, whistle, cittern and harmonium. I strummed a guitar and drank tea. And ate biscuits. A satisfying excursion all told. ("Dance Of The Carrots" turned out particularly well.)

I wonder if he wears a cagoule and carries his fiddle around with him when goes for the rolls and milk?


Before I go - I updated my film/tv music showreel:

Posted by Francis Macdonald at 09:26 No comments:

Jotting in an old notebook:

A wee while ago I worked on the music for a short film "When A Man Loves A Woman". Here is a short film about me doing just that:


A couple of years ago I attended an inspiring Composer's Lab event at the Edinburgh international Film Festival. Matt Dunkley was a brilliant guest speaker. His "Six Cycles" is out now and available on Spotify.

(But if you want to buy some REAL music...just kidding!).

I keep listening to this - part of it reminds me of Joan Armatrading singing "...but I'm open to persuasion". 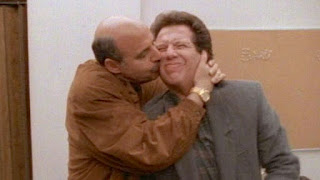 Yonks ago I loved the double bill of Seinfeld and Sanders. (Was it on BBC 2 on a Tuesday night? Och, who cares.). Hank's sex tape was a favourite (("Sex is not a dirty thing. Sex is not a crime. It's a loving act between two or more consenting adults."). Here is a lovely short piece about Shandling's last email to GQ writer Amy Wallace.


And now an extract from "Piano Notes" by Charles Rosen (I am persevereing despite his employing the phrase "flail" when describing rock drummers mid performance).


Re. how to greet a performer after a performance: "Nadia Boulanger...would come backstage, hold your right hand in both of hers, look you straight in the eye and say, "You know what I think!"

Posted by Francis Macdonald at 12:06 No comments:


I saw Maestro Young promoting his "Switchblades Of Love" album at King Tut's Wah Wah Hut in Glasgow in, I think, 1994. Great solo acoustic performer. I asked to interview him for a US country fanzine: 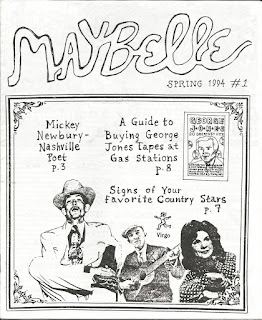 ...even although I wasn't a writer and I had had no contact with the magazine other than picking up copies in Tower Records in Glasgow.

Steve gave gracious assent. In his dressing room upstairs in Tut's we talked about Hank Williams, Sun Records, Dick Gaughan's "Handful Of Earth", Otis Redding's "That's How Strong My Love Is", Steve's Latino neighbourhood of Silverlake in LA - and I'm not sure what else. The fanzine folded before they could consider (because of?) my brilliant scribblings.

A few years later I set up Spit & Polish to champion Laura Cantrell (check back for more info on that great artist soon) and other country music. I was thrilled to get to license Steve's "Primal Young" for release in the UK on S&P.

The few times I met Steve he was always a gentleman. I once took him for a pre-gig curry in the old Creme De La Creme in Finnieston and we talked about how simple acts of human kindness can be so moving. Funny what wee things pop up in your overstuffed memory bank.

Oh well. Thanks for the music and the memories, Steve.

On Tuesday I went to this: 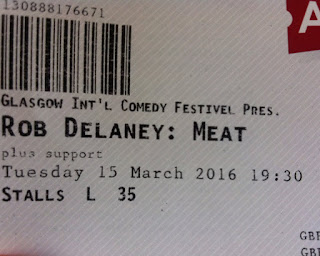 On Sunday I went to see this:


Great stuff - both the screening and the panel discussion afterwards. Every time Riccardo Marini spoke he got a round of applause.

I liked this article about film editor Jim Clark.

And that is all I have to say - back to writing music for a project I can't tell you about.

PS - nice to be part of this appreciation of Steve Young.

Posted by Francis Macdonald at 04:29 No comments:

I thought The Second Mother was a good film. I wanted to give
Regina Casé a hug.


I also remembered how much I *love* this song:

On Friday night Gogglebox included "Dunblane - Our Story". I wasn't sure how this segment would sit with the rest of the show (it generally has a fun, light tone) but it seemed to take over and establish itself with ease. An STV production for BBC now being promoted on Channel 4. it was very moving all over again and as director Stephen Bennett tweeted, the comments were "spot on".

In her final weeks Carey Lander established a Just Giving Page to fund research into Sarcoma - the cancer which took her life. Look how much money has been raised now. The page will close in a few days.

Posted by Francis Macdonald at 03:13 No comments:

Teenage Fanclub have a gig.

I saw Anomalisa and liked it. I thought this review was pretty spot on. 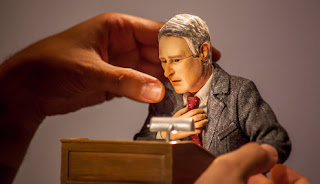 
It was a privilege to work on the music for "Dunblane - Our Story", Exec Produced by Mick McAvoy and Produced & Directed by Stephen Bennett. As I type it is still on BBC i-player - here 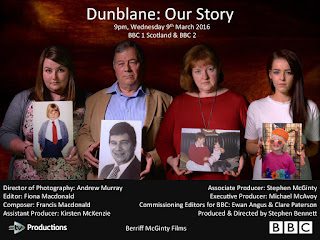 Some TV reviews:
“The makers did what good documentary makers should do in the face of such overwhelming stories: recorded the words of those at the heart of them simply, edited unobtrusively and didn’t give way to sentimentality.”
Lucy Mangan, The Guardian
“It was, of course, harrowing stuff. I defy anyone who watched it not to have welled up – or worse. But at the same time, it was utterly absorbing.”
Amy Burns, The Independent
“This was a portrait, all the more moving for its restraint, of those whose lives were either lost or irretrievably changed by grief and sometimes guilt … Much had to go unsaid, but what was striking was the power of brief words to encapsulate a great deal.”
Jasper Rees, The Telegraph 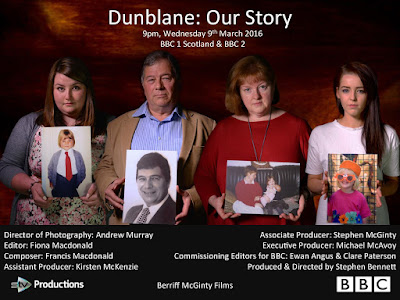 I worked on this STV production for BBC with director Stephen Bennett and Exec Producer Mick McAvoy.

Last Thursday I attended a BAFTA Scotland preview at BBC, Pacific Quay, Glasgow where Stephen took part in a Q&A, explaining his approach to making the film. It was apparent - from both the screening itself and Stephen's comments - that he felt a great responsibility and duty of care to the contributors.

I think Stephen and Mick have made a powerful, worthy, sensitive film and I am proud to have been involved. It says something that all the contributors who chose to view it have been supportive of this telling of their story.

Posted by Francis Macdonald at 10:17 No comments:

While I wait in vain for the BBC to reissue The Little Of World Of Don Camillo with the wonderful Brian Blessed chewing his way through the set, I consoled myself with the 1953 feature film t'other night: 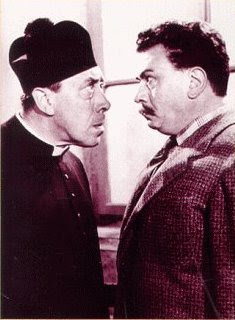 Now back to me.

"Stopping Scotland's Scammers" returned for a new series on STV and they are still using my music. So that's nice. (I'm not one to boast but did I ever tell you about the time  Jackie Brambles bought me a drink? Och never mind...)

If you want to hear some lovely radio, listen here from 35 mins  as Tracyanne Campbell from Camera Obscura talks with Lauren Lavern about her late, amazing pal Carey Lander. 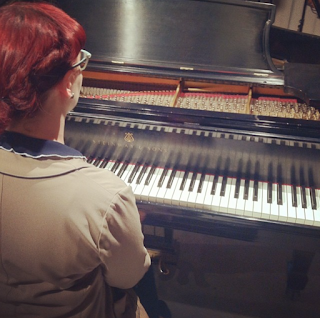 In her final weeks Carey set up a Just Giving Charity Page for Sarcoma UK. As I type it has raised in excess of a whopping £97k. Amazing legacy.


Posted by Francis Macdonald at 02:03 No comments: