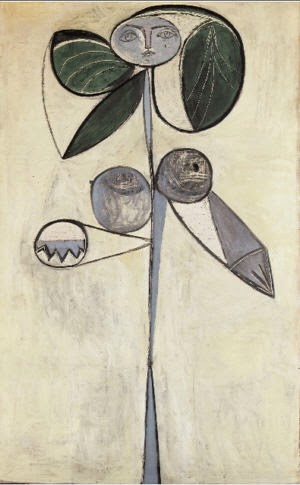 So, Francoise Gilot's "Life With Picasso." 'Selfish rascal' hardly suffices. On his dalliance with the wife of a good pal; "I only did it to make him happy. I didn't want him to think I didn't like his wife."

Posted by Francis Macdonald at 04:33 No comments:

Some reactions so far.. 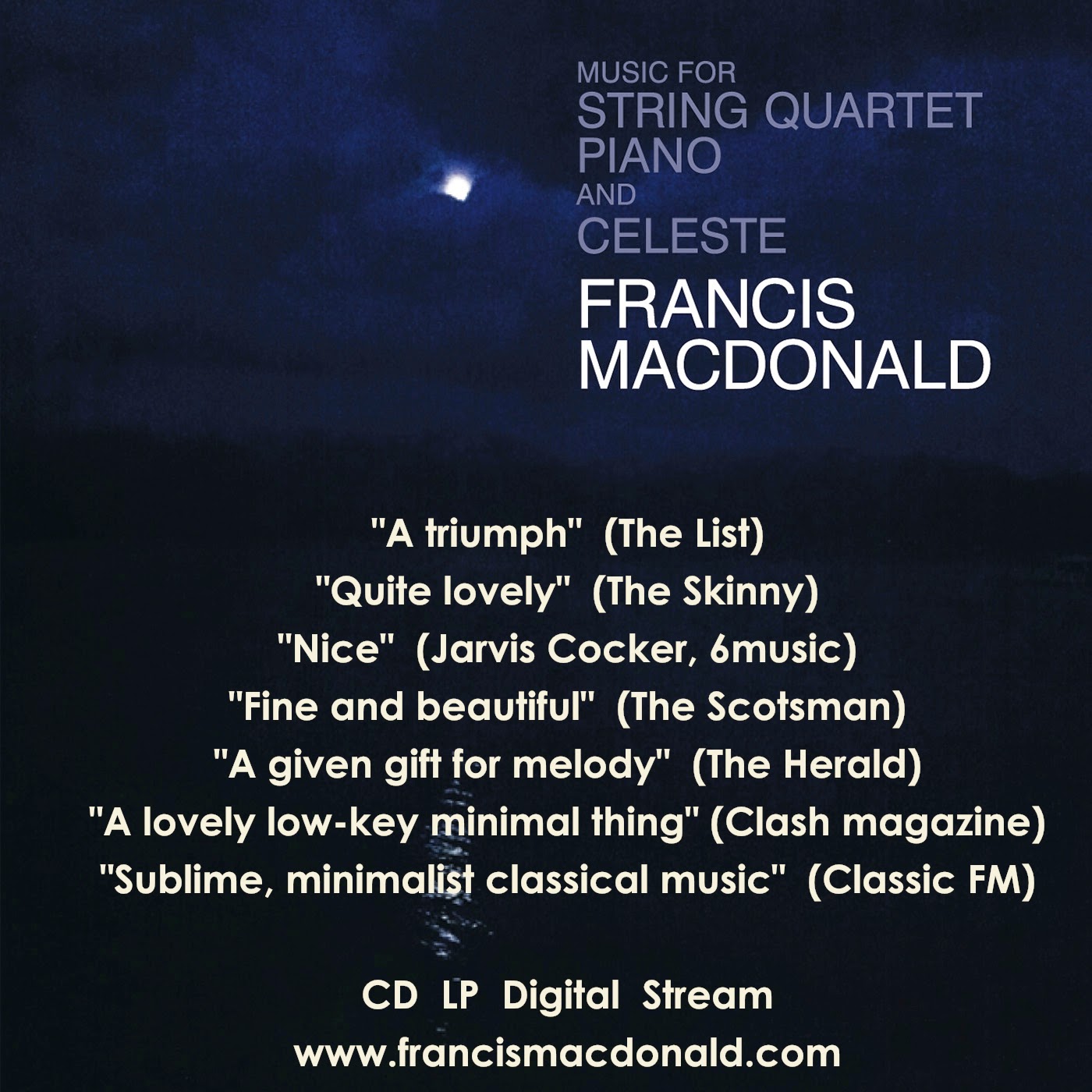 And here is my interview with the lovely John Toal on BBC Ulster.

All this kind of makes you want to buy it, huh?

I saw half of Force Majeure in the cinema. I was lapping it up. Then the screen went dark. And the dialogue continued. Then we waited. Then it restarted. But without subtitles. Then I went home. O well. Some other time. 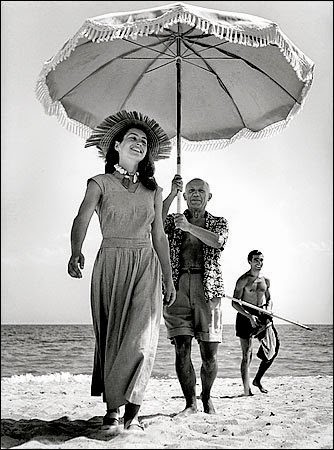 I have started into Françoise Gilot's "Life with Picasso", purchased on a stag weekend (not mine) in St. Andrews. As you do. How nice to walk into a pleasant bookshop and buy a book. (What year is it anyway?) I've fancied reading this since learning that it made Suze Rotolo reconsider her relationship with Bob Dylan. So far Picasso has suggested that Gilot live in his attic cut off from the world so she can be his secret. And they have both visited Gertrude Stein who seems to be a right barrel of laughs.

What else? Working on music for my own secret things.

And - I am singing a couple of songs at Cottier Theatre on Thur 30th April for the Bare Facts event.

And on that note.... Tara for now.
Posted by Francis Macdonald at 13:19 No comments:

I saw the new Kurt Cobain doc in the cinema this week (thanks, BAFTA Scotland). Powerful and engaging. I felt I got an insight into how troubled Cobain was and how his music was so necessary to him. When Nirvana played the QM in Glasgow with Captain America and Shonen Knife I managed to be in the dressing room after the show but I didn't have any meaningful interaction with anyone (there goes that book I was going to write...). I have a vague memory of Kurt Cobain saying to Norman Blake that Teenage Fanclub should play show shows with Nirvana and they did. Unfortunately I wasn't in TFC at the time. When Molly's Lips came on in the cinema it sounded particularly rocking. Which reminds me:

I've got a ticket to see Philip Glass's "Music In 12 Parts" in Glasgow next month. Should be quite an experience. As I previously tweeted, my 6 year-old's reaction to the CD was, "I like this music... It's like a miracle happening and a robot dancing for it". Here's one of his first pieces I spent time with.


*cough* Back to my album "Music For String Quartet, Piano And Celeste".

Here's an interview I did for Tom Dunne on his show for Irish radio station NewsTalk.

Oh, so - what have Teenage Fanclub, Camera Obscura, Laura Cantrell, The Vaselines and Coronation Street got in common? Clash magazine asked me to explain in this amazing interview

Anyone got any good recipes for mung beans?


PS - remember, a vinyl LP isn't just for Record Store Day - it's for Christmas too.
Posted by Francis Macdonald at 01:17 No comments:

Book recommendation an' that

So I've been digging this. 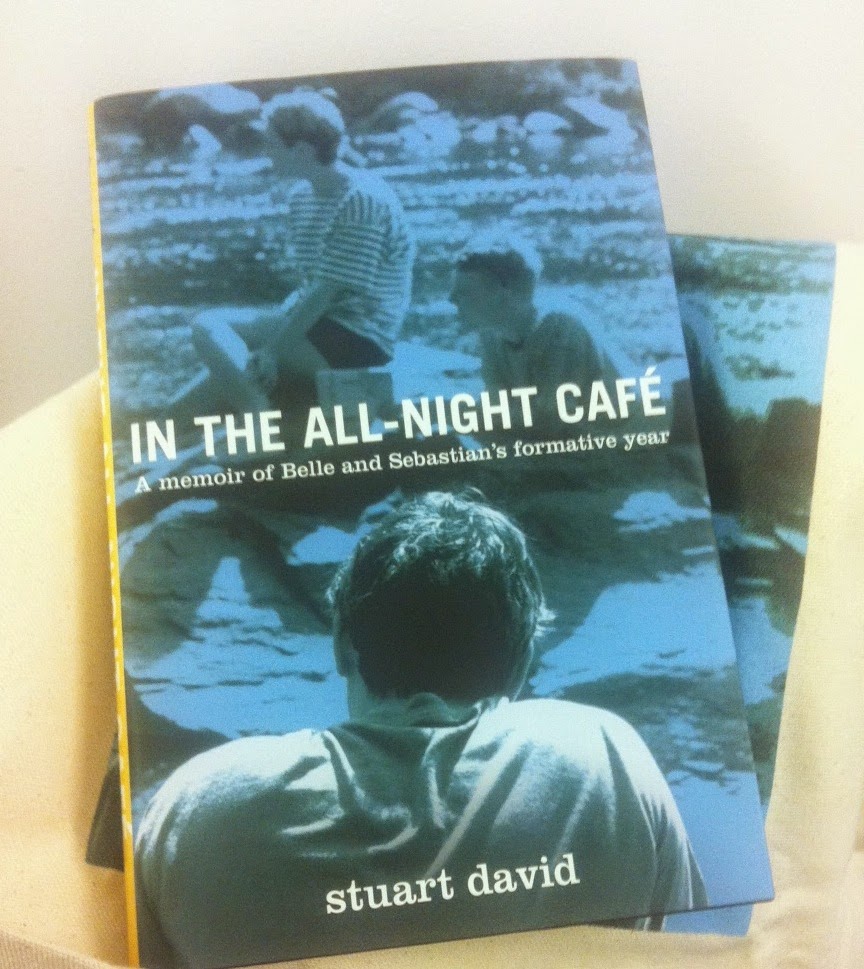 Nearly finished. Don't want to get to the end just yet. It's funny and charming and evocative. Takes me back and I wasn't even there. It's good to get a book that you go through like a hot knife through butter.

This was a brilliant piece of telly I caught up with last week: 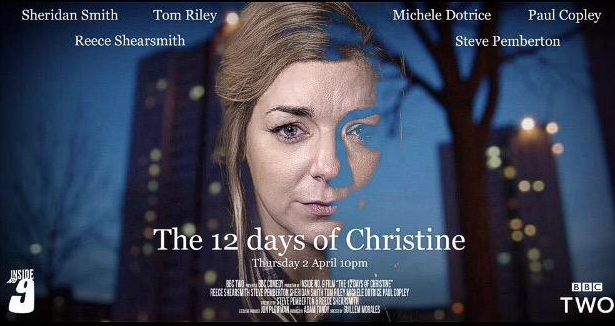 The more I think I about the speech I gave at the BAFTA Scotland New Talent Awards last week (I was presenting for Composer) the more I wonder if I actually said it - or was it maybe just an anxiety dream? O well. Done now.

Oh! I'll be singing a couple of songs at the Bare Facts event at Cottier Theatre, Glasgow on 30th April. I'll be chuffed to share the bill with the amazing Kathleen MacInnes.

Nearly managed to get through a blog without mentioning this. 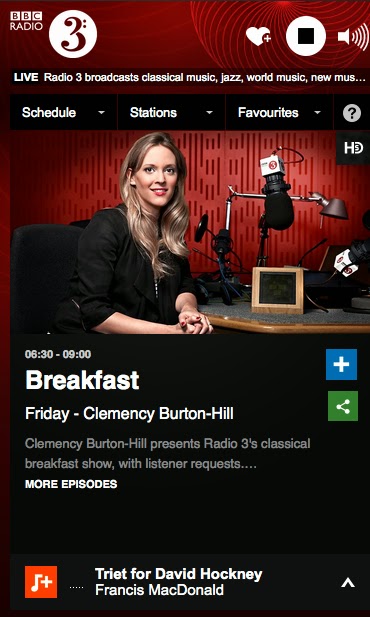 This is a groove.

Posted by Francis Macdonald at 13:50 No comments: 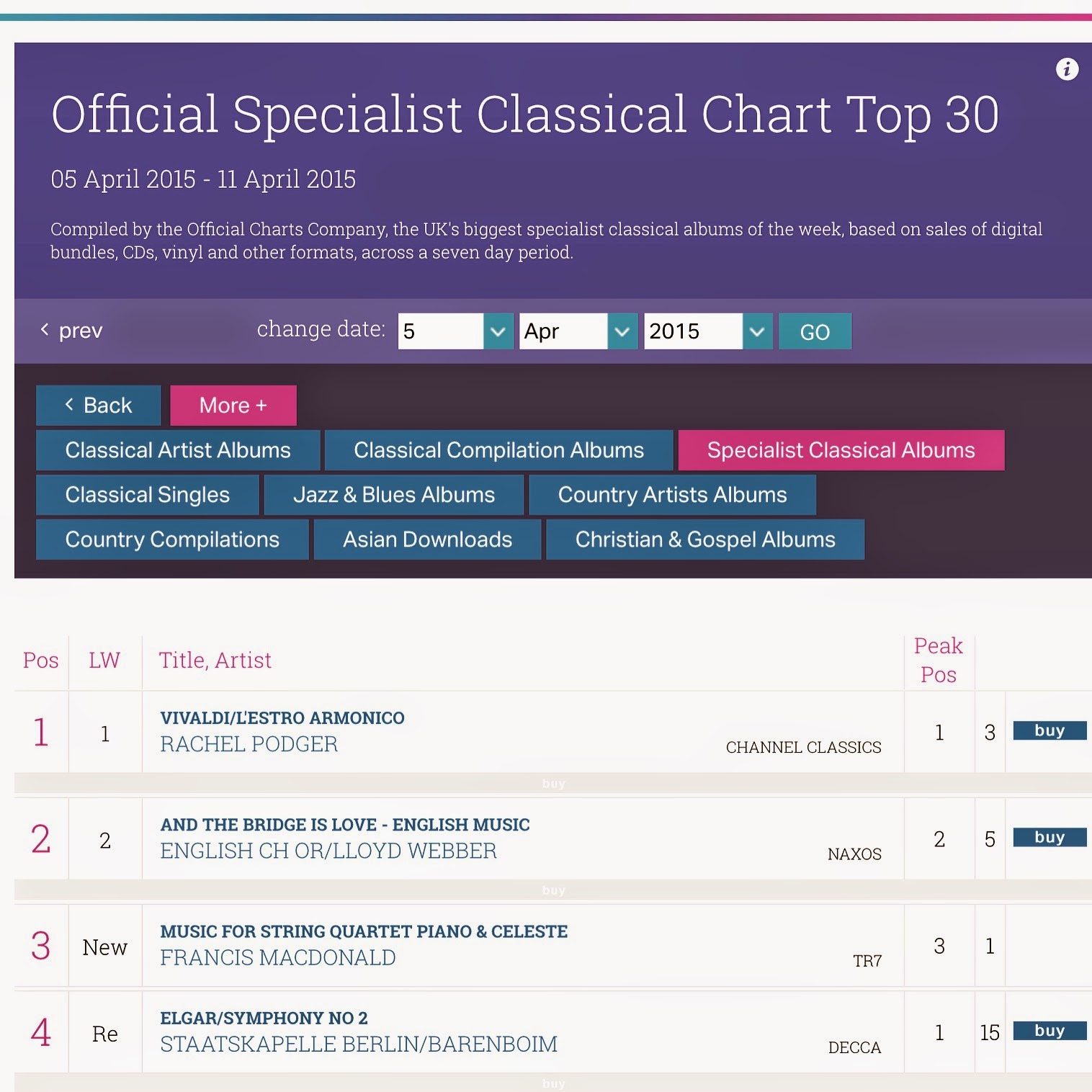 This led to getting a spin on BBC Radio 3's Breakfast Show this morning. Download the podcast here.

And this in turn inspired me to make a wee video for the track - "Triet For David Hockney":


If you haven't bought the album yet but you are thinking about it - go and buy it: www.FrancisMacdonald.com

In other news I had a swell time at the BAFTA Scotland New Talent Awards in Glasgow last night; I saw Wild Tales and liked it a lot; I was given a surprise gift of Stuart David's new Belle & Sebastian memoir which looks like an entertaining read; and...och I think that's enough excitement for one blog.


Posted by Francis Macdonald at 06:46 No comments: 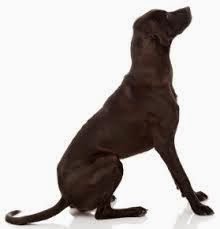 Every year when I was wee my late mum used to say, "There's a big black dog in the garden!" and I would run to the window. Suckered again. I tried it on my 6 year-old today. His reaction: "You said that last year".

In other news, the "Music For String Quartet, Piano & Celeste" bandwagon rumbles on. 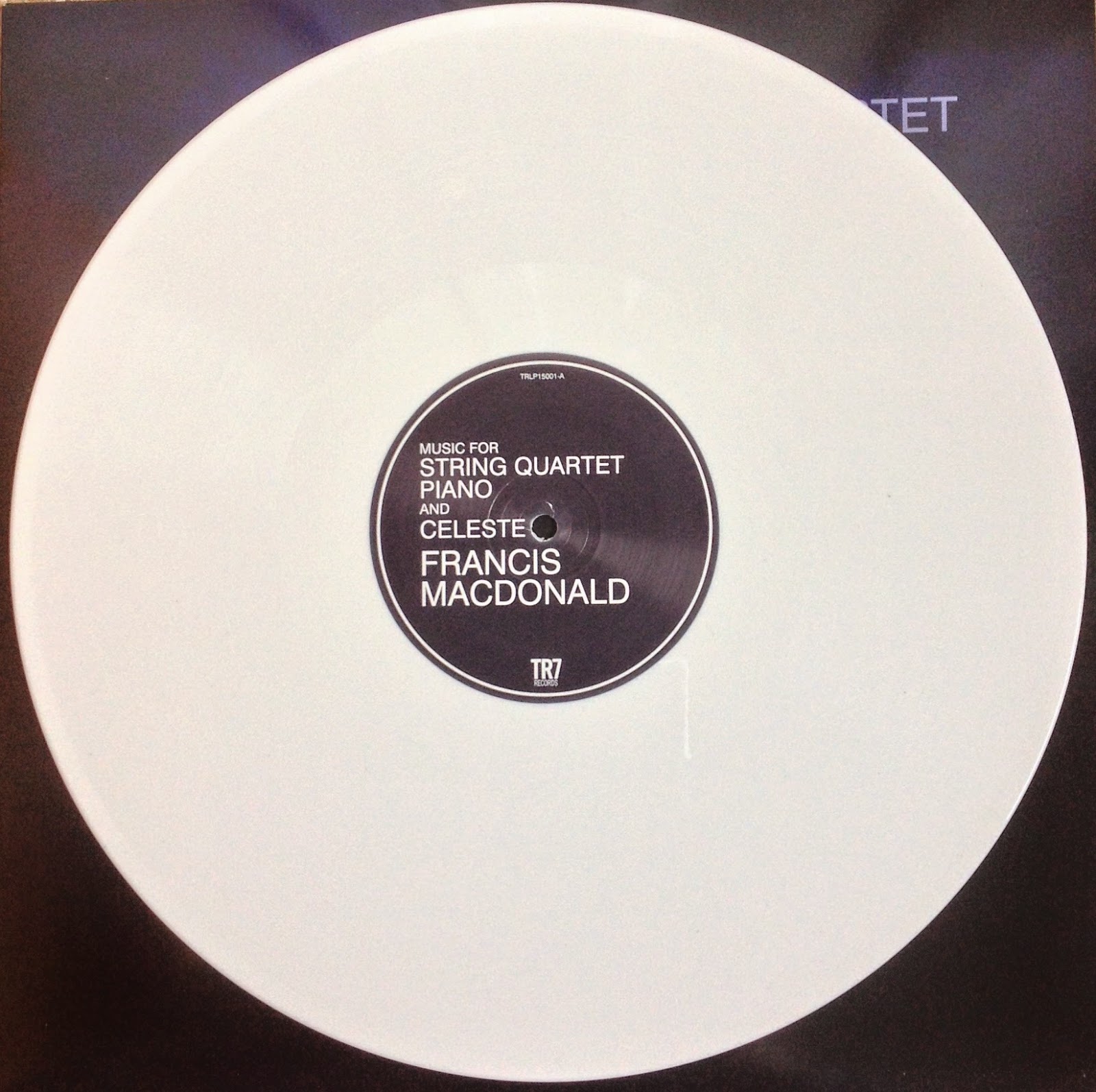 I scaled the heady heights of #11 on the i-tunes Classical Charts for a bit this week...there have been more plays from Classic FM and Jarvis Cocker on BBC6 music and from both John Kelly on Lyre FM and Kelly-Anne Byrne at TXFM Dublin in Ireland...The Scotsman described "Music For String Quartet, Piano And Celeste" as "fine and beautiful"...and the lovely Janice Forsyth had me on her BBC Scotland Culture Studio show and made my interview one of her podcast highlights. Click and download to hear a Scottish man fail to take a compliment in his stride.

Makes you want to buy it, right? Well, here come some links:

Before I go - I saw two good docs this week: "Pantani - The Accidental Death Of A Cyclist" and, on BBC's Storyville, "My Mother The Secret Baby".


Posted by Francis Macdonald at 07:18 No comments: