The Truth about Me, Lenny Henry & Picasso

I recently supplied music for this BBC One show... 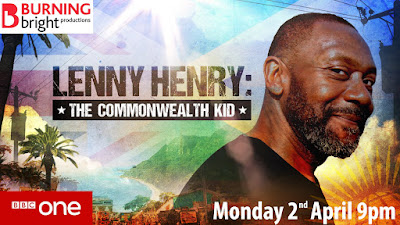 Buy me a drink and I'll tell you all my Lenny Henry anecdotes (I don't have any. I never met him). 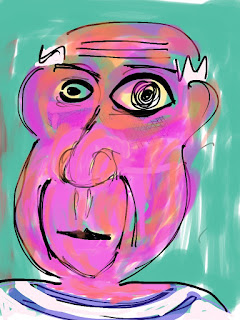 Oh! Tracyanne & Danny have released "Alabama" from their forthcoming album on Merge:

Great, right? Love Edywn Collins popping up. I got goosebumps first time I heard this song and I still get them.

Posted by Francis Macdonald at 03:03 No comments:

The esteemed writer (and grandfather to my children) Bernard MacLaverty attended the live premiere of my Hamilton Mausoleum Suite on Monday 19th Feb.

Bernard was kind enough to send me his diary extract, allowing me to publish it here on my blog. (btw - I can attest that Bernard's latest, critically acclaimed book "Midwinter Break" is an enthralling read...) 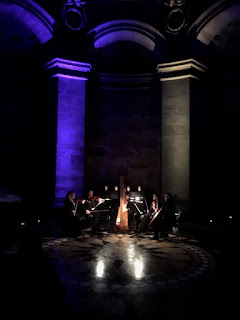 In the evening I go to a unique event organized by Francis at the Hamilton Mausoleum. On the way in there is a thin eyelash moon over the distinctly odd structure. A string quartet with harp playing his composed music – the same music which has just been issued on CD by Shoeshine Records. It is fiendishly cold and the audience sit around the perimeter in overcoats and bobble hats. Almost all of them look up into the distant dark copula. Escutcheons and bare bummed putti throw strange shadows. It’s hard to know what you’re looking at. There is concealed lighting in the vastly tall interior, lighting the stone uprights – undersea green, sky blue, purple, and broom yellow. On the ground is a design of marble marquetry which feels upwardly dished when you walk over it.
The musicians are playing in their overcoats. I can see only one musician wearing black fingerless woollen gloves. Little glimmers of light come from various places. Behind the players four or five lanterns, other places T lights. The cellist’s breath is visible when he exhales past  the downlight of his music stand.
The evening begins with Francis addressing the audience. His voice demonstrates the echo immediately. He tells us about what he hopes we are about to hear. When he turns his head away the sense of his words is lost. They boom into the  surrounding alcoves. He tells us this is close to where he grew up, where he went to school, where he cycled with his friends as a boy. When he finishes there is jagged applause  followed by silence. There is a strange and unexpected sound like a gurgle. My daughter Ciara has had the foresight to bring, not one, but two hot water bottles. She passes one to me for under my coat and the silence is reinstated.
The music begins and so does the controlled reverberation. The notes amplify and echo. They put on sleeves of themselves and the effect is wonderfully satin. The pace of the music is stately so that the melodic lines do not cancel or cross over. The bowed strings are horizontal, the plucked harp vertical. There is a solo piece for the harp which is magically successful.
At the interval Francis tells us that they are  going to let us hear the effect of the echo by banging the huge front door shut. A man in a high viz yellow jacket opens, then slams the door to. It sounds like a gunshot and goes on banging around the place for whole seconds ( the circular building once held the record for the longest echo of any man-made structure). We all feel like applauding the doorman but nobody does. Everyone strolls about to get their circulation going. On a ledge I see ten little black woollen teats, then recognise them as fingers freshly snipped from a pair of gloves.The second half of music broadens the scope of what we are listening to – one piece is consciously paced so fast that the notes impishly smudge and grate. I remember the American modernist composer, Charles Ives, who said to his audiences, ‘Stand up and take your dissonances like a man.’ The whole evening comes to an end with rattling, sustained applause. Some whistles and bravos. A few people attempt to clap still wearing woollen gloves – plump, plump, plump. Others jump to their feet and stamp, more for reasons of heat than anything else. One of the amazing things is that everyone leaving the building remarks on how warm it is outside.
All agree that it is a night they will never forget. Buy the CD. Remind yourself of the music by your own fireside.

Posted by Francis Macdonald at 07:56 No comments:

Since We Last Spoke...

...I attended the New Music Scotland Awards - fun night at the Drygate Brewery in Glasgow. Hope NMS can flourish for years to come... 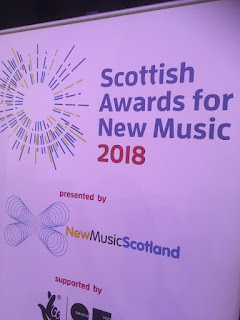 So this brilliant film is kind of about everything....


And this dark, slow-burning slice of show-don't-tell filmmaking stayed with me long after the credits...

Last week I managed to take a photo of Morecambe and Wise just before they jumped through a window in Maryhill Park, Glasgow.

I've been working on music for a thing with brilliant harpist Sharron Griffiths and a string quartet (Justine Watts, Stewart Webster, Emma Connell-Smith and John Davidson) from the Scottish Festival Orchestra. 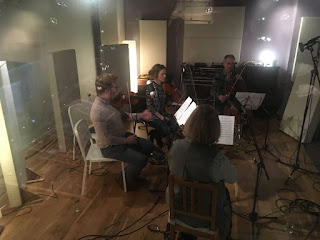 More on that soon.

This sure is an interesting New Yorker article on the Pablo Escobar industry and 'narcoturistas'...

Did I mention that "Hamilton Mausoleum Suite" is now on Spotify?

You know all about Tracyanne & Danny - right?

I'm still loving The Young Offenders on BBC One. Funny and heartbreaking. Writer-director Peter Foott is an amazing talent, in my humble opinion. 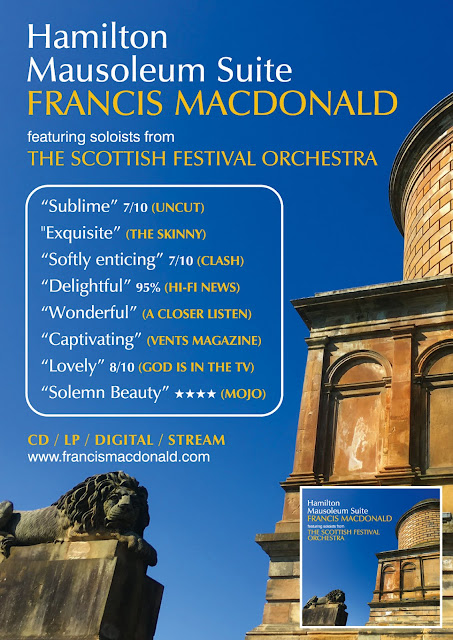 Unfortunately the planned performance of the suite in Helensburgh on 13th March has had to be cancelled. It was nice to be asked but 'twas not to be. Aww.

But enough about me.

Tracyanne & Danny is a new project from Tracyanne Campbell (Camera Obscura) and Danny Coughlan (Crybaby) - an inspired meeting of musical minds. Their new album "Tracyanne & Danny" was produced by Edwyn Collins and Sean Read. It will be released on Merge on 25th May.

And here's a whole song:


And here are the UK tour dates: 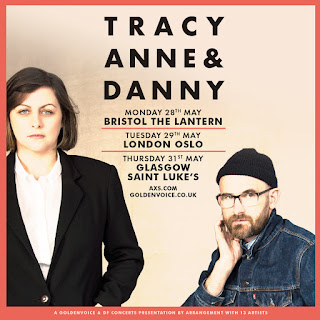 And here are the US tour dates: 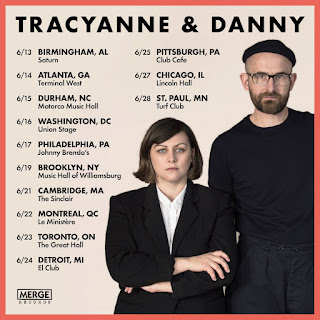 
There. If you can't get a ticket come show time, don't come crying to me. The album is bloody brilliant btw.

What else? Recent films watched (thanks, BAFTA Scotland) = A Fantastic Woman (thumbs up) and Black Panther which let's just say is not going to be mistaken for a fly on the wall documentary.

Whatever you think of awards ceremonies I'm glad The Shape Of Water won at the Oscars. I loved it. Definitely one to watch on a big cinema screen. But then again aren't they all, darling?

Keep in touch.
Posted by Francis Macdonald at 02:17 No comments: