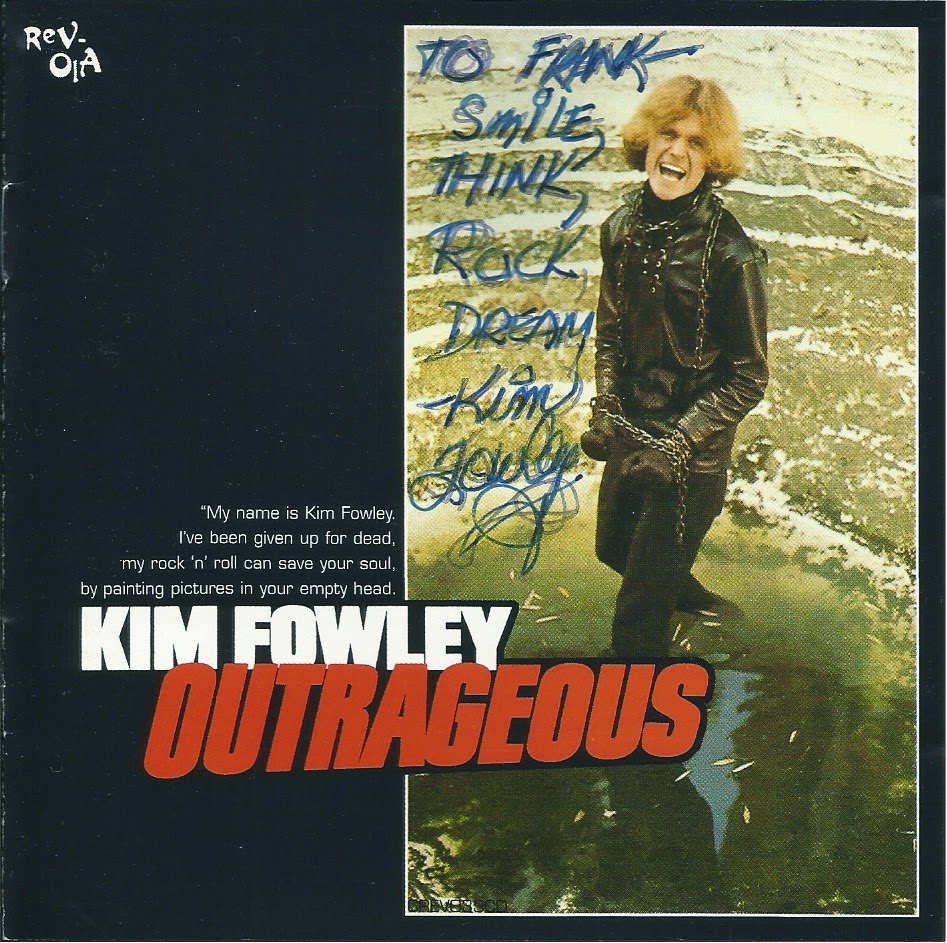 I wanted to write something about the passing of Kim Fowley  because my time in his orbit was such a profound and inspiring experience. But any single anecdote leaves out a hundred others. How to sum up such a complex, crazy, obnoxious, hilarious, messed up, likeable, ridiculous, scary, sex-driven, sexist, needy, intelligent, bullying, self-promoting, exaggerating, boyish, outrageous, principled, manipulative, cartoonish enigma? Maybe I just did.

I wouldn't apologise for Kim. If you met him and disliked him, I guess you'd be right. What is there to discuss? But I found my own way with him. And I learned a lot - probably more from him than any other single music person I ever knew. He made a lot of situations more exciting, entertaining and fun. Ben Vaughn once said something to the effect that Kim was very intelligent but was working in an essentially stupid business (ie rock music).

As a member of BMX Bandits he produced us and I wrote some songs with him. In one 18-hour session in 1996 at the old Riverside Studios in Clarkston near Glasgow we recorded and mixed, Help Me Somebody, Lonely Teardrops (Kim got Duglas to sing in an English accent), The Girl Nextdoor and (We're Gonna) Shake You Down (which began with Kim asking me to play My Generation on the guitar and then telling me to change it while he asked questions about the band and wrote down the lyrics). From having asked Kim to produce 2 x songs for a vinyl single on my wee Shoeshine label, Alan McGee then said he should produce our next album because he made us "play out of our skins". Kim ended up producing - and co-writing - a chunk of Theme Park, our last album for Creation Records.

I asked Kim to produce a single for my country band Radio Sweethearts. We assembled at Riverside and a few seconds into our first go at the John Miller original "New Memories" he declared "It sounds tired". The next take was a little more 'committed'. Kim called out another song; we played it. He called out another; we played it. I felt us becoming more of a band right there and then with the tape rolling and Kim looking bored on the other side of the glass. Several hours later we were mixing our debut album. Kim later got it released in the US. (This led to us being sent some Jerry Lee Lewis recordings on which to add overdubs - that album remains unreleased.). Kim determined that I should be credited as Frank - something about 'Francis' being a little "too gay for the rednecks". Hmm. I had a question about the song sequencing. He managed to close that issue down and move on quite effectively: "The dope smokers will like it because they can smoke dope to it".

When Kim was living in New Orleans I used to send him a kind of denture powder from the UK that he favoured. In return he would send me (second hand) country CDs to help in my musical education.

He told me he fell out with Tav Falco during a meeting in which Tav's girlfriend took umbrage at Kim referring to rock n roll as "product".

BMX Bandits backed Kim for a gig at the 13th Note Cafe. 'Darkly exhilarating' would be as good a description as any. I'm not going to pretend I know what it felt like to be at Altamont but... 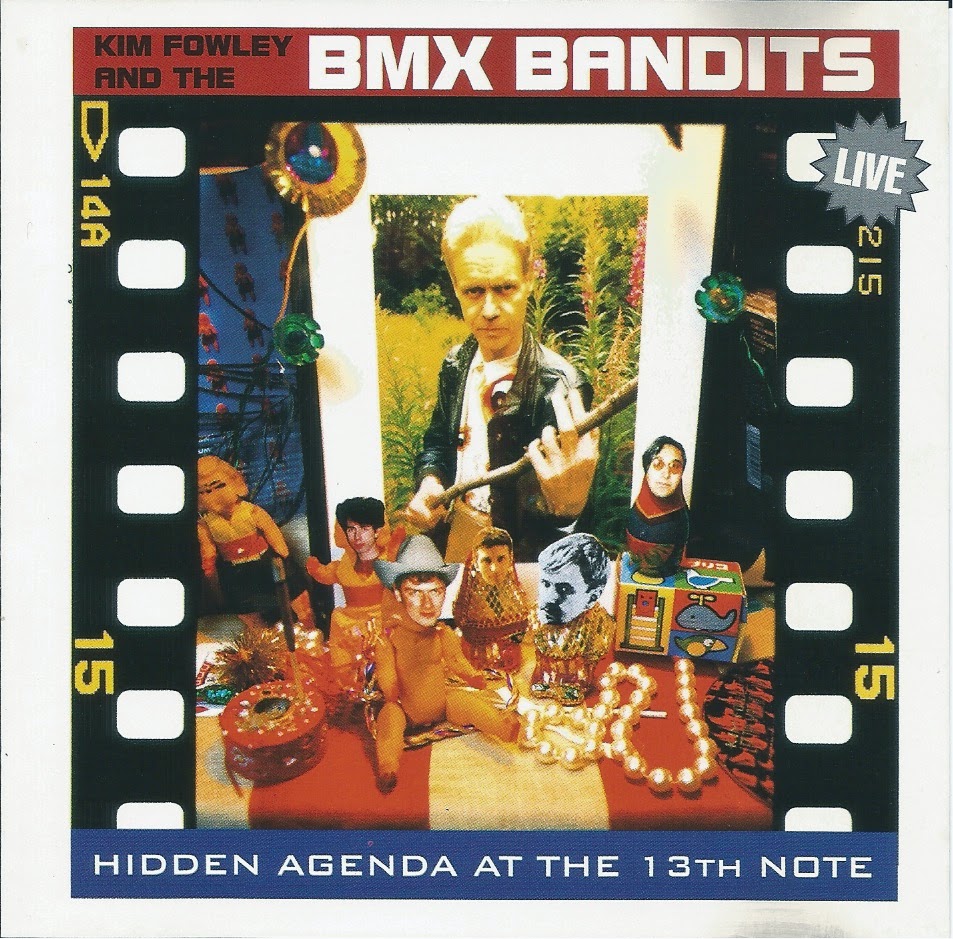 Once in a while he'd call me up and talk for an hour or more. Every call was legendary - full of insight, anecdotes, advice, schemes. He once phoned me to ask "who to hustle" in order to get more money out of Creation for producing BMX Bandits. Producer's royalties are ultimately charged back to the artist. I said, "Kim - you'e asking me how to ensure my band gets less money at your expense!". This amused him. I think the phone calls were partly business, partly needing to talk to someone. He once met my girlfriend and later told me, "Marry Ciara. Don't end up lonely like me".

Kim could burn bridges and wear people out in a flash.

During his first stay in Glasgow he threw everyone out of the flat he was staying in, threatening to overturn a table. He had a comb which he would brandish like a knife and a big ring that would be introduced as another weapon. When he discovered he'd ejected members of Teenage Fanclub, The Soupdragons and The Vaselines he was furious that he hadn't been told these were "important people" (he was always trying to hustle new production/co-writing gigs). During a session for BBC Radio Scotland, backed by us BMX Bandits, he apologised for this incident in the intro to one song (nice try, Kim).  Kim wanted the session to be an album called "Ghosts Of Scotland".

He couldn't play any instruments but had a great, intuitive sense of melody. And, to my ears, he had a great singing voice. A lot of presence. Soulful.

His dad, Douglas Fowley, was an actor. He plays the crazed director in Singin' In The Rain. Kim's dad made Kim help him learn lines and would punch him in the face when Kim made mistakes.

He was an arch complainer: "I don't internalize!"

Kim stayed with me and my mum for 3 x days in 1996 (!!??!). He charmed her, complimented her soup and, when she exited the room, moaned on about the shortcomings of BMX Bandits, castigating our saintly bass player for some comment or other ("John Lennon never spoke to me like that") and generally wore me down to a whimpering wreck. Then we'd get a few hours sleep and head off to the studio for another long, darkly exhilarating day.

Some quotes that come to mind:

"I want to grunt like a love-ape in the jungle of your reality."

"Do you want me to produce or do you just want my name on the record?"

"The human ear delights in change."

"I asked John Lennon, "What was the secret of The Beatles?" He said, "We took our favourite records and made them better". Great answer, John."

"Here's what I hate about people like you: "Do you like my red shoes?" They're OK I guess, "I knew you'd love my shoes"".

He told me he met Bob Dylan three times.  Once at a party in a big house in LA (in 1965?), in Kim's telling, a lot of people turned on Dylan and hassled him to sing a song. Kim said he jumped in and got Dylan to play some "Bob Dylan chords" while he made up a song with a subject from the audience. They said "Walls" (I climbed every wall in my dreams...). This was years before Who's Line Is It Anyway. I wonder if Bob remembers the time Kim came to his rescue.

The first time I spoke to him on the phone (about the looming gig with BMX Bandits) he refused to consider performing any of his old songs. Instead he asked me for a subject (I said radio), a style of music (soul?) and whether it should be fast or slow (slow). He started crooning down the phone:

"I'm listening to my radio,
In the afterglow,
Of a cold beer,
Crying lonely tears,
Cos you're not here..."

I think I bit my hand to suppress laughter. When he finished I told him, "That was great!" - a compliment he took in his stride.

Some LA producer (I can't remember who) told him that when recording handclaps two people is not enough and four is too many.

Kim told me that he planned to come to London when "Nutrocker" was a hit and reckoned his publisher would have introduced him to the Beatles before they broke. He would have recognised that they were The Everly Brothers with an extra singer and he would have been the producer that they hadn't found yet. It could all have been so different. But  he saw the pale skin of some English girls getting changed at the beach in LA and decided not to bother. I asked him what the moral of the story was and he kind of shrugged and said something like "stuff happens". I said, "No - the moral of the story is never let your libido get in the way of a good idea." He laughed. (As if he was ever going to let anything get in the way of his libido....)

I think my favourite Kim Fowley song is "California Summertime".

He took me for a meal in New Orleans. Catfish and French fries, I think. We went elsewhere for ice cream and he asked the little girl serving us if she could sing.

He said "International Heroes" was supposed to sound like "All The Young Dudes" but the drummer got the beat wrong.

He told me Danny Wilson "Mary's Prayer" was "godhead".

I agreed to pay him some money for producing a BMX Bandits single and he made sure I remembered to pay him or I'd know about it. I was walking down the stairs in Jason McPhail's flat when he called out to remind me to bring him his cash or else- "I know", I said with slightly forced detachment, "You'll open my eye with your ring and finish me off with the comb." Thus came the langurous reply, "You got it".

He told me he once saw Elvis Presley playing touch football with his cronies; that he did pre-production on the first Stooges album; and that Dennis Wilson was a big fan of his Outrageous album

I wasn't in touch with Kim in recent years. I knew he had been battling cancer and I knew it had returned more than once. Maybe I thought that such a strong life force would always be around for a bit longer.

I made an album with him. "Fantasy World" was released in 2003. Kim described the finished article as "record collector rock". He seemed to mean this in a good way. I had an acoustic guitar. He had a mic (an SM58 maybe?) and some prepared lyrics ("I wrote this for The Byrds in 1970; I wrote this for The Runaways but they never used it.... "). Davie Scott engineered. Duglas T Stewart was a witness. East Kilbride Arts Centre. I would play some chords. Kim would improvise a vocal melody. Some songs he improvised the lyrics 100%, one of his favourite things to do, of course. A few weeks later I added bass, drums, guitars, percussion, keyboards and BVs and sent the mixed album to Kim. He liked the bells on "My Baby And I". I particularly liked "22nd Century Boy". And I liked "School Girl X", not least because I made up the chords and Kim made up the words and melody in one take and, well, we got this (listen out for Duglas and/or Davie squealing with laughter in the background as Kim comes up with "Now we're both about to die" and the section that follows (2mins 48)):

We're gonna have a teenage eternity, just you and I,
We'll always be forever be young and in love,
We'll listen to the music of the soda shop and the hot rod and the surf,
There'll be no drum machines, there'll be no diseases,
There's just gonna be you and I and the flowers on the trees in the schoolyard,
Rocking tonight at the school dance,
Cos we'll feel alright and all our friends
To the happy end, there's no use pretending....


Thanks for everything, Kim.

Posted by Francis Macdonald at 14:56